You are here: Home / Dessert / Marshmallow Sauce for Fruit 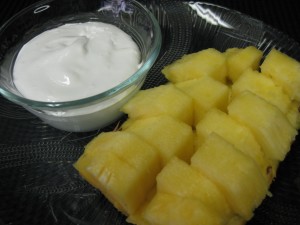 Quite unusual, this sauce was served on a Fruit Plate at the Nut Tree Ranch’s restaurant in California many years ago.  It could be ordered with cottage cheese, sherbet or ice cream making it either a salad or a dessert.  The gift shop sold recipe cards as a souvenir which is how I came upon the recipe.  I replaced the mayonnaise in the marshmallow sauce with sour cream to make it more of a dessert sauce. 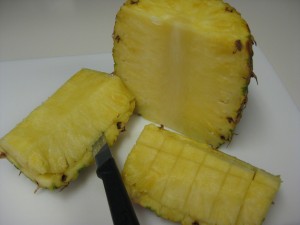 The other fruits it was served with included strawberries, figs, and grapes.  It’s always a topic of conversation the first time someone has this.  Kids will love it.

Combine sugar, corn syrup, and hot water.  Heat, stirring until sugar dissolves.  Then boil without stirring to firm ball stage (245 – 250F – I like it done up to 255 F for a thicker sauce) – until a drop of the mixture forms a firm but malleable ball in ice water.  If not using a thermometer, start testing after about 5 minutes.  May take up to 10 minutes. This recipe is a bit forgiving – cook it longer rather than not enough.  In humid weather, cook to higher temperature.

With electric mixer, beat egg whites until stiff.  Slowly add hot syrup in a thin stream, beating at high speed until thick and fluffy.  Add vanilla and salt.  Gently fold in sour cream and rind.  If too thick add a bit more sour cream or try beating it a little after adding the sour cream which causes the sauce to thin quite a bit.

Over the years people have told me I should write a cookbook. Well - this is it. If I had written a cookbook, my first book would have been recipes to help people put dinner on the table. You really can't get real home cooking in a restaurant. It is not as hard as it may seem. I hope to write the recipes in easy to follow and clearly described steps - if you can read, you can cook. Where applicable, I will give "shortcuts" you can use to achieve the same recipe.